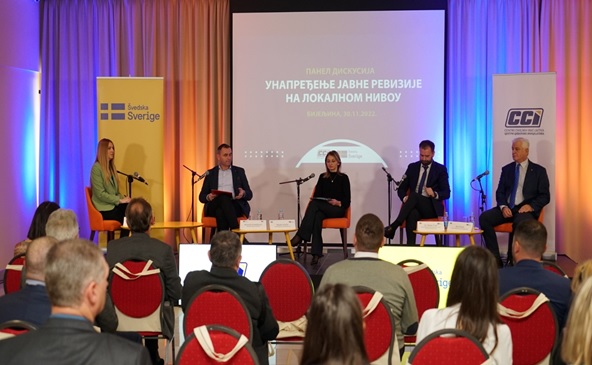 Senior Auditor for Financial Audit of the Supreme Audit Office of the Republic of Srpska Public sector, Dr. Bojan Ćurić, actively participated in the panel discussion on the topic “Improving public audit at the local level” organized by the Centers of Civil Initiatives, which was held in Bijeljina on November 30, 2022.
The Vice President of the City of Bijeljina Assembly, the Head of the Finance Department of the Municipality of Pale, and the Secretary General of the Union of Municipalities and Cities of the Republic of Srpska participated in the panel discussion. The event was also attended by representatives from 22 local self-government units of the Republic of Srpska.
The focus of the discussion was primarily based on the implementation of the recommendations given by the Supreme Audit Office by conducting financial audits and performance audits and the mechanisms that can ensure an increase in the degree of their implementation, one of which is local parliamentary supervision.